This weekend in Bangalore, India will host Serbia in an intriguing Davis Cup World Group play-off. Under different circumstances, 2013 finalists Serbia would be hands-down favorites for staying in the elite sixteen-nation group at the top of men’s tennis. But a Serbian side without three of its top players is vulnerable, as seen this past February when the “B” team—composed of Ilija Bozoljac, Filip Krajinović, Dušan Lajović, and Nenad Zimonjić—lost in Novi Sad. Serbia’s second city also happens to be where these two nations first met to contest a Davis Cup tie, a 4-1 win for the Serbs in 2011.

India’s team for this meeting will feature three of the same players: relative youngster Yuki Bhambri and veteran Somdev Devvarman alongside doubles specialist Rohan Bopanna, who together with Aisam-Ul-Haq Qureshi makes up the ATP tour’s “Indo-Pak Express.” Though he and partner Katarina Srebotnik were still in the US Open mixed-doubles draw, Bopanna was kind enough to sit down for a conversation about the city he calls home, Indian tennis, and the growth of the sport in Asia. (An edited Serbian version of this interview was published by B92.)

Create your own caption… ©ATP

When we talked, the final rosters for both teams were uncertain. Bopanna thought he’d be paired with Saketh Myneni, with whom he’d played—and won—doubles rubbers during India’s previous two ties, and the status of the ATP #1 was up in the air. While the rest of the Serbian team was preparing to compete without their singles star, Novak Djoković spoke about both what it means to him to participate in Davis Cup and the decision he was weighing: “Of course playing for the country is something that awakens a real passion in me and a sense of. . . belonging and really positive emotion and drive. But [on] the other hand, I also have a very important stage of my life. I’m about to become a father, so that’s something that is a priority now.” Given the “wait and see” situation, I started by asking Bopanna an obvious question.

AM: You said in an interview for the Davis Cup website that you think it’d be good for tennis if Novak comes to India, regardless of the outcome. But in the interest of your team winning, wouldn’t it be better if he didn’t come?

RB: You can’t think like that. At the end of the day, he’s been such a great player for his country and won the Davis Cup title with them. Not only that: if you look at it that way, we wouldn’t want any of the top players competing. Davis Cup is such a format that the rankings never matter—I mean, on one given day there can be many upsets. If you saw the last one, Wawrinka was playing Golubev in Switzerland and that was a big upset.

So, I think it’d be great for Indian tennis—not only if Novak’s playing, but even if he’s just there as part of the team. Tennis needs encouragement in our country and having a such a great player like him come and participate in an event like this would be wonderful, no matter what. Of course, it’ll be much tougher, no doubt: their team goes up from 10 to 20 with Novak on it. But we have to be ready for the best team to come to India and play. The thing is that before Thursday, they can still change the nominations.

AM: It’ll partly depend on what happens here, of course.

RB: Exactly. And Novak isn’t thinking of Davis Cup right now, because this is such a big event.

AM: There’s the US Open on this end and his baby’s due-date on the other.

RB: Yeah, he has a lot of things going on.

Since then, Leander Paes was called in to play his fifty-first tie for India and Djoković, after a disappointing semifinal loss to Kei Nishikori in New York, opted to skip the play-off to recuperate for the final stretch of the season and spend time with his expectant wife, Jelena. Luckily, Bopanna and I discussed more than how the two teams match up.

The Garden City was named for its numerous green spaces, including Cubbon Park (where this tie will take place) and the Lal Bagh Botanical Gardens.

AM: Unfortunately, I don’t think I’ll be able to attend the tie, though I’d love to see India. But I’m still curious: what would you tell Serbs visiting Bangalore (or Bengaluru, as the locals call it) for the first time?

RB: I live in the city! The first thing is that language is not a problem, because everyone speaks English; so, that’s a big bonus when you’re going to a new place. I know a lot of people do speak English in Serbia, as I’ve been there. Of course, there are a lot of great restaurants around the city, many different cuisines to sample. Bengaluru is known for its breweries as well, so people who like to drink beer will enjoy that.

Though it’s called the Garden City of India, do expect a lot of people on the road, a lot of traffic and honking. That’s normal—it doesn’t matter which city in India you go to. We are used to it, of course, living there; but if you come from a country that doesn’t have all that it can be a bit overwhelming. There are various different categories of hotels and the hospitality in India is always very good—the service is good, so that’s a good thing to expect. People in Bengaluru love tennis, so I think there will be a great crowd, too, to come watch the tie.

Tipsarević gets a lift from Paes after finishing his second final at the 2012 Chennai Open. © AFP/Getty Images

There are a number of connections between members of the Indian and Serbian squads. Most notably, Nenad Zimonjić has partnered Leander Paes and Mahesh Bhupathi, collecting trophies with both men. Two other Serbs, Janko Tipsarević and Bozoljac, have also had success with Indian partners, winning titles with Paes and Devvarman, respectively. While Tipsy kicked off both the 2012 and ‘13 seasons with quality runs in Chennai, this year was Bozo’s turn for a hot streak in India: he made the semifinals in New Delhi and won the Kolkata Challenger. Not least, the two nations have this in common: they’ve both produced remarkable results in tennis despite not having the world-class infrastructure of some of their Davis Cup rivals.

AM: Obviously, it’s a big deal to have Davis Cup at home, and I know you have the ATP 250 event in Chennai, as well as the series of Challenger tournaments in February. You have had so many top players in the past couple of decades, and a long tennis tradition as well, rooted in the British influence. How would you assess the current state of Indian tennis?

RB: I think there’s still a long, long way to go because our system is not really good. So, that is slowly picking up. [To give an example,] I have a physio from South Africa, Shayamal, traveling with me for a while and he’s now opened his own clinic in Mumbai, trying to help and get physios involved in tennis. Especially for an athlete, after training, you need a physio. So, even the awareness of that—plus fitness, along with coaching, and building a few more academies—makes for more progressive tennis. It’s going to take a while, I think, to really come up. There’s also good corporations coming out and helping a lot of these academies and teams, which raises awareness and gives everyone hope.

You know, in India it’s still the fact that people think, “Ok, so you’re playing tennis, but what else are you doing?” In India, the [professional] priorities are such that everybody needs to be either a doctor or an engineer—studying is such a big thing. A lot of people don’t realize that tennis could also be a living. And they don’t realize that it’s a full-time, committed career. . . It’s not a hobby.

Also, we have cricket in India—and it’s grown so much in recent years. Now, there are corporations trying to invest in other sports as well and trying to get recognition for them. So, tennis is still very much at the grass-roots level and needs a lot more building. Luckily, we have many more athletes coming up. . . . The fans are looking for new, different sports as well, which is nice.

AM: Speaking of other sports: in the US, there’s been some excitement about an Indian basketball player who’s going to be in the NBA, playing for the Sacramento Kings. Have you heard of him?

RB: That’s right, Sim Bhullar—I know because actually he’s the nephew of one of my friends. He was telling me when we were into Toronto [for the Rogers Cup] and they actually came to the tennis courts. My trainer took a picture with them and he’s about 5’8” and these guys are 7’5”!

AM: India, given its size, has a huge pool of potential talent that hasn’t necessarily been tapped. Will his being in the NBA make a big difference for basketball in India, like Yao Ming did in China?

RB: Definitely. I think it’s great. Hopefully, we have more of those 7-foot athletes—that’s not there in India so much. Even when I go back, at 6’3”, I’m considered above average, which I’m not when I’m traveling on the tennis tour! In tennis, I think 6’2” is the average. Especially for the NBA, you need the height.

AM: Among people in the former Yugoslavia—and not only tennis players—there’s certainly interest in forging ties with the East as well as the West. For instance, even before his Uniqlo sponsorship, Novak was quite attuned to the Asian market for tennis. Do you think the IPTL (promoted by former partner Bhupathi) is also going to help the growth of tennis in India and other parts of Asia?

RB: I think it’s going to be really good for Asia to have all these top athletes coming and playing night matches. And for us, as players, it’ll also be fun to be a part of it and playing on these different teams. 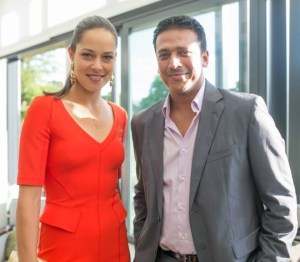 Three of Serbia’s biggest names have already signed on to play in the IPTL later this year: Djoković and Zimonjić (along with Croatian legend Goran Ivanišević) were selected by the UAE team, while Ana Ivanović is on the India team along with Bopanna, Sania Mirza, and Rafa Nadal. The league runs for two weeks, starting in late November.

Postscript: The day after this interview was published, the ITF announced that Rohan Bopanna will be one of the players honored with the Davis Cup Commitment Award this weekend.